LEDs in the husbandry of animals with UV vision (reptiles, birds)?

Many birds and reptiles need high light levels to stay healthy when kept indoors. In the past years fluorescent tubes and metal halide lamps have been used. Recently LEDs are becoming more and more popular. They promise cheap and energy-efficient lighting solutions with excellent colour properties. However, I recommend not replacing metal halide lamps and fluorescent tubes with LEDs.

The main reason: LEDs are not white for reptiles. I am a bit of a fundamentalist here: I would not use LEDs at all. And I know that I hold an outsider opinion here. Many people are very euphoric about LEDs. They experience huge reduction in cost and heat. I most cases, I doubt that these savings are real (see below). Savings of 20 % are possible, if LEDs really hold their lifetime promise. I do not think this small saving are worth an unnatural light colour. Even if reptiles do not show direct adverse effects, I do not want to expose them to such an unnatural light if alternatives are available.

But some very experienced reptile keepers use LEDs. Either for the complete background-lighting instead of fluorescent tubes with some metal halide lamps for the basking spots. Others only use LEDs in addition to fluorescent tubes to provide some plants with a bit more light. They usually claim that they do not see any change in the behaviour of their animals or anything else that makes them think their animals would not like the light.

In the following I will explain what I mean by “non-white light” and show an example calculation of the costs of fluorescent tubes and LED bars. I hope these facts will help you to decide whether you want to use LEDs and to what amount. I also list alternatives at the end of the page.

One reason, why LEDs are so efficient, is their spectrum. LEDs do not waste energy to radiation that is invisible to the human eye. White LEDs do not emit UV or infrared. They look white to us humans, because the amount of blue, green and orange light is roughly equal. We have tree colour receptors in our eye: for blue light, green light and orange light. If all three receptors see the same amount of light, they tell the brain that the light is white.

White LEDs are usually blue LEDs with a phosphor that converts a part of the blue light into green, yellow and orange light. The kinds of phosphors used and the balance between blue light and the phosphor(s) determines the colour temperature (CCT, Kelvin) and the colour rendering index (CRI) of the LED. Typically, the CCT of LEDs is between 2700 K and 6500 K. The CRI of household LEDs has to be higher than 80 in the EU and can also be higher than 95 for very good LEDs. Only a tiny change in the LEDs spectrum is needed to change CCT and CRI. The overall spectrum does not change much. All typical white LEDs have a narrow peak around 450 nm and a broader peak around 600 nm wavelength. The do not emit light with a wavelength lower than 420 nm and hardly any light with wavelengths larger than 700 nm. 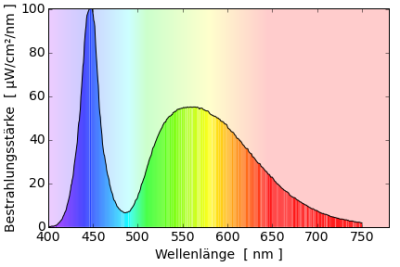 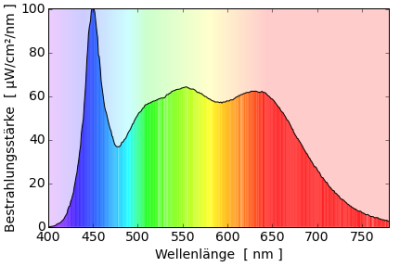 On can debate, whether reptiles care for colour. One cannot debate about the information that is transported by colour. If you have normal colour vision, you will easily spot red strawberries, cherries or redcurrants between the green leaves. They are “eye-catching”. Did you ever wonder why the second large category of berries, e.g. sloes, are blueish-black and hardly visible in the bushes? You are not meant to see them! These berries are UV-coloured and just as eye-catching for birds are red cherries are for you. Fruits and flowers have eye-catching UV patterns. Some lizards have UV-coloured patterns. We know, that chameleons communicate using colour. Some people report that their reptiles are more active, eat better, and mate only when UV light is present. You remove information when you use a light source that is not white!

Many people hope that they can mix light from different sources. It works perfectly to mix UVB light from a fluorescent tube and infrared light from an incandescent lamp. It works, to mix invisible light with visible light. But it does not work well to mix colours. Have you ever been to a disco, ice skating hall or any other location where coloured lights are used? Where alternating green and pink lights are switched on at the ceiling and form coloured shadows on the ground? This is what happens, when you try to mix light of different colour coming from different directions. The photo shows a plant, lit from above with a bluish fluorescent tube and from the side with a yellowish incandescent bulb. Reptiles will see similar light effects in a terrarium that is lit with a LED bar (no UVA) and a UV-metal-halide lamp (large amount of UVA). When a reptile with UV coloured patterns moves through a terrarium with UV-coloured and non-UV-coloured shadows, its pattern will disappear and reappear as it moves inside and outside these shadows. 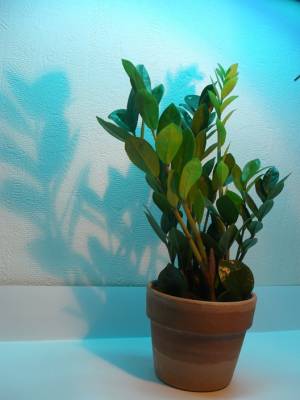 Question: What about UV LED?

Yes, they exist. You can already buy arrays consisting of differently coloured LEDs with which you can mix any spectrum you want. The price and livetime of these multi-wavelength-LED-arrays are shocking. And I fear coloured shadows.

There are thousands of advertisements that recommend replacing your existing lamp by a LED and reducing the power to a small fraction. It is true, that a 10-W-led replaces as a 60-W-incandescent bulb. In domestic lighting, LEDs really can save a fortune! But if incandescent bulbs are still used in a terrarium, there heat output is likely needed and the incandescent bulb can’t be replaced by a LED.

But the other lamps, that are used in terrariums, metal halide lamps and fluorescent lamps, are much more efficient than incandescent (and halogen) bulbs. Here, LEDs usually do not save much power.

To get the efficiency of a lamp, the amount of light (lumens) is divided by the power used to produce the light (watts). LEDs with up to 200 lm/W exist, but this number only holds for laboratory conditions. “Real-World”-LEDs have to deal with the voltage that is available in your country. Ballasts are needed to convert the voltage to 12 Volts or 24 Volts direct current. These ballasts consume additional power. “Real-World” LEDs have to be bright, which means they also become warm and that reduces their efficiency. Taking everything into account, LEDs often only have a wall-plug-effiency of 80 lm/W to 100 lm/W.

Of course, the calculation depends on how much you pay in your country for lamps and for electricity. I have programmed a calculator tool (in German, perhaps google translator helps), that you can use.

If you are lucky an LED can save 10 % or 20 % costs compared to a fluorescent tube. If LEDs did save 90% of the costs, one could argue that the cost saving is more important that the colour problem (next section). But with this small saving, I would not take the risk of using an LED. Also, this cost advantage only holds, if the LED really lives up to the promised age. Approximately 35% of the household led bulbs that I bought in the last two years died after less than 12 months. Promised by the manufacturer where 25 years!

Question: Something must be wrong with the lumen or the efficiency calculations. My 6,7 W LED strip really is as bright as a 24 W fluorescent tube.

When I unpacked my 6,7 W LED strip and placed it next to a 24 W fluorescent tube of the same length, the LED really seemed brighter. It seems like magic. But there is a simple explanation for it: the human eye does not sense the luminous flux but radiant intensity. Not the amount of light is important for the human eye, but how large the area is, that emits that light. My led strip has 49 LEDs with a size of 2,6 mm x 1,0 mm. The total amount of light (780 lm) is emitted by a total area of 1,27 cm². The fluorescent tube emits its light (1750 lm) has a total surface a 2765 cm² (length 55 cm, diameter 16 mm).

If you point both light sources to a wall or the ceiling and look at the homogeneous white surface, you will easily see the huge brightness difference. Also a simple lux meter will tell you the truth without being cheated by the size of the emitting surface.

Measured illuminance (lux) under the 24 W T5HO fluorescent tube and the 6,7 W LED.

Question: Something is still wrong! In my office / garage / hall the fluorescent tubes where replaced by LEDs. Now it is much brighter at the floor and still the power is reduced by a factor of two!

The old fluorescent tubes have certainly lost some of their brightness during use. Additional light loss comes from dirt on the tubes, the housing and the reflectors. It is always unfair to compare a used fluorescent tube to a new led. Additionally the new LEDs in these kinds of applications are often optimized to concentrate the light to the areas where it is needed. The old fluorescent tubes quite likely lost light to the ceiling and to corners where no one works and the light is not needed. Perhaps you also had old conventional ballasts for the fluorescent tubes, which a lot of energy. Some people find bluish light (high colour temperature) uncomfortable and harsh and falsely assume that the light is bright. So if the colour temperature of the lamps also changed, this might add to effect.

Question: Fluorescent tubes are too hot for my terrarium. LEDs really reduce the temperature because they produce light without heat.

This would violate basic laws of physics. In other words: No, this is not possible!

And secondly: LEDs are not perfect. They convert only 30 % to 50 % of the electric energy into light. The rest of the consumed electrical power stays inside the led and makes it warmer. You will not always feel this warmth as rising temperature: LEDs need to be kept cool, so a good LED bar contains a cooler that distributes the warmth, so that the temperature stays cool. But the warmth is only distributed, not reduced! Even if you have a very high quality LED bar that always feels cool to the touch, it will heat your room with 50 % to 70 % of the total power of the LED.

In summary: a 100 W electrical device always heats with all of its 100 W. I have tried to visualize this and have put different lamps and heating cables in a small Styrofoam-box and measured the temperature rise. I chose the Styrofoam-box because it is a small, well-isolated volume that heats up quickly and thus makes the heat easily visible as temperature. 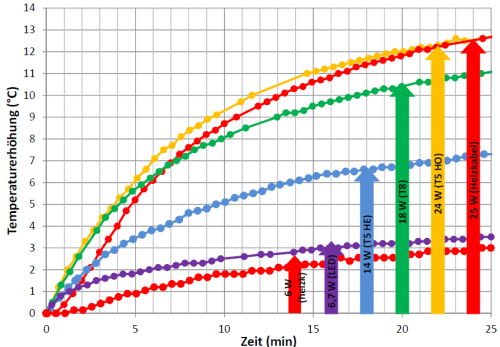 There is only one way to reduce the heat load: Reduce the electrical power! But because fluorescent tubes and LEDs are roughly equally efficient this can only be done by making it darker.

If you need to reduce the heat introduced into the terrarium, but making it darker is no option:

Alternative Lamps that are white to reptiles

I love metal halide lamps! They have their own page on my website

“Normal” metal halide lamps for retail lighting have a very solar-like spectrum. They can be used for background lighting with a diffuse reflector or for the basking zone in a more focussing reflector. 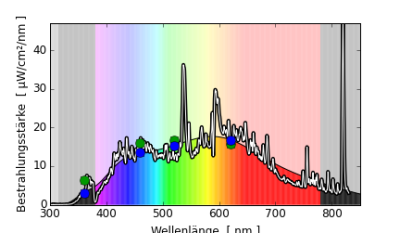 Reptile metal halide lamps with UVB often have a bit too much UVA and the spectrum is a bit spikier. But the advantage of having UVB can outweigh these cons.

Fluorescent tubes are available with all kinds of spectra. Normal “office” fluorescent tubes (colour code 840) emit small amounts of UVA. Better are fluorescent tubes with additional UVA phosphors. Lamps sold as “full spectrum” or “daylight” sometimes have these phosphors (but keep in mind that there is no legally binding regulation and these names are mere marketing). Also fluorescent tubes sold in pet stores for reptiles usually have 2% UVA. 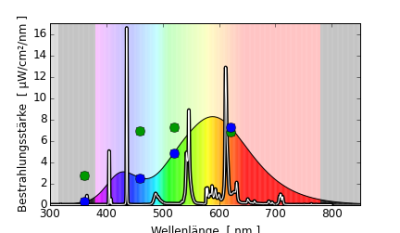 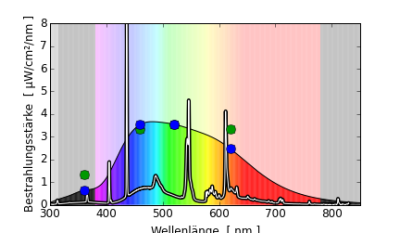 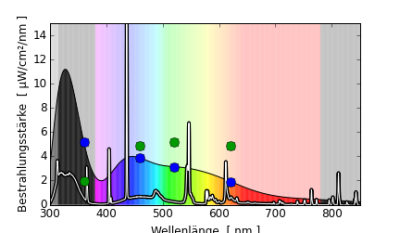