A Colour Space for Reptile Vision Visible Light Quality - its spectrum and its colour.

Since the development of the first electric lamps 130 years ago, the market for lamps for human and animal lighting has become confusing. To make the choice for customers easier, the correlated colour temperature (CCT) and the colour rendering index (CRI) of the lamp are often provided and almost everyone who is dealing with lamps knows these two numbers. People understand that the CCT indicates how warm and yellowish or cold and bluish the light is. A high CRT is usually interpreted as a good spectral quality, a spectrum close to the solar spectrum or that all colours look natural under this lamp.

I will argue in this text that CCT and CRI have little or no meaning for reptiles (and birds, amphibians, other mammals). While the above interpretation of CCT and CRI are almost correct in most situations where humans are involved, the exact definition is slightly different. So I will first explain how colour is calculated and how CCT and CRI are determined. I will then summarize what is known about reptile colour vision. In the last section I want to compare some lamps and give my opinion on their light quality from a reptile’s perspective.

Calculating colour is actually not complicated at all. Everyone who is able to understand the outcome of a football match with 2:3 will be able to understand the most important results of colour calculations. For those interested in the full calculation (tools needed still restrict to school mathematics: multiplication, integration, addition and division) I will also give more details, but all readers with no love for numbers and formulas can skip these paragraphs.

Three types of cones are present in the human retina. Like the pixels of a chip inside a digital camera they respond to incoming light and convert the light to an electric signal. The three cones are often called blue, green, and red cone. In the scientific literature, the terms S-, M-, and L-cone are preferred. The blue cone responds mainly to blue light, the green cone mainly to green light and the so called red cone to green, yellow and a bit of red light. To “red” cone is not really a correct name, but I will use it anyway because it is easier.

And actually this is all math needed. The colour of every light reaching the human eye can be written down by two numbers, in this example (0.179 ; 0.107). The famous CIE-colour triangle is just this: The colour values (x;y) of all possible light colours are calculated and a dot in the respective colour is made in an x-y-diagram. 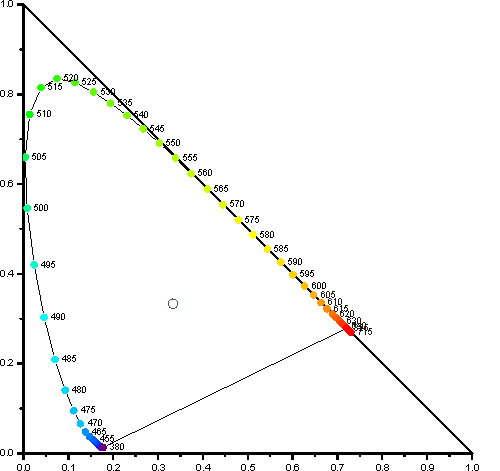 More details for those loving numbers and formulae:

Colour calculation was developed long before it was possible to measure the response curves of cones in the retina directly. Therefore humans were placed in a test set-up and asked to match colours. One half of a circle was illuminated with a primary colour (that is light of a single wavelength) and the other half was illuminated with a mixture of red, green and blue. The human was then asked to adjust the intensities of the red, green and blue lights so that both colours looked the same. The resulting curves are the CIE 1931 RGB colour matching functions. They were not practical as they included negative numbers, so a linear transform was used which resulted in the CIE standard observer colour matching functions $\overline{x}(\lambda)$, $\overline{y}(\lambda)$, $\overline{z}(\lambda)$. These response functions are used in all colour calculations instead of the cone response functions. The “signal” from the “X-photoreceptor” from a light with spectrum $S(\lambda)$ is $X = \int\mathrm{d}\lambda S(\lambda)\cdot \overline{x}(\lambda).$. The colour coordinates $x=\frac{X}{X+Y+Z}$ and $y=\frac{Y}{X+Y+Z}$.

When you heat up a peace of iron it first starts to radiate infrared and when it becomes hotter it starts to radiate red light. The hotter it gets the colour shifts to yellow and then to a yellowish white. The spectrum from an ideal object – a black body – can be calculated. It is a typical calculation done during a physics course at university, not really complicated but too much for this article. Important is, that the result is a nice formula and the people developing the colour concepts of lamps used it as a reference. It makes sense to use the black body as a reference because incandescent lamps and the sun are very close to an ideal black body. The colour coordinates of the black bodies of different temperatures lie on a curved line in the CIE-colour triangle. This line is called black body locus. When the colour coordinate of a light source lies close to the black body locus, the temperature of the closest point is called the correlated colour temperature of the light source.

The eye does not only see light that is directly coming from a light source, but also light that first hits an object and is then reflected. Also for this reflected light, the colour coordinate can be calculated. Red objects will have their colour coordinate in the red part of the CIE colour triangle and blue objects in the blue part. But it also depends on the light source, exactly the colour coordinate lies (or in other words: how the colour looks). Human skin has a colour that can vary a lot when different light sources are used, in daylight human skin usually looks much healthier compared to low-quality fluorescent tubes in some dimly lit train station rest rooms. Blue socks have a different colour in sunlight and in dim incandescent bulb light, where they seem almost black. A red pullover only looks bright red in daylight or incandescent light, but not under the yellow sodium street lamps that are still used in some places.

To determine the colour rendering properties of a lamp, the CIE has chosen eight colours. Because light and greyish colours are (like skin colour) very difficult to render, light greyish red, dark greyish yellow, moderate yellowish green, light bluish green, light blue, light violet, and light reddish purple were chosen. Six more colours are optional: strong red, strong yellow, strong green, strong blue, light yellowish pink and moderate olive green. Again the black body is the reference. The colour coordinates of the eight colours are determined for the light source and for the closest black body. Only for lamps with a CCT higher than 5000K, standardized daylight spectra are used for comparison.

I have mentioned several times, that the calculation of CCT and CRI depends on the spectral sensitivity of the human cones. Reptiles do not have human cones.

There are two ways of studying whether reptiles are able to see colours, that is, whether they are able to distinguish differently coloured lights independent of their intensity. Firstly, one can train a reptile to distinguish between two differently coloured plates. In subsequent tests, the colours of the two plates are made increasingly similar, until the reptile is no longer successful in choosing the right plate. This demonstrates how well it can distinguish two colours. The second method is to study the retina: What cones are present in the retina, and what wavelengths of light are necessary to make them respond with a nerve signal? Colour vision of reptiles has been studied in turtles (AMMERMÜLLER & KOLB 1996; ARNOLD & NEUMEYER 1987), chameleons (BOWMAKER & LOEW 2005), geckos (TAKENAKA & YOKOYAMA 2007; ROTH & KELBER 2004), anoles (LOEW et al. 2002), snakes (SILLMAN et al. 1997) and salamanders (PRZYREMBEL et al. 1995). In general it can be said that many reptiles have four cones, that are sensitive to UVA, blue, green and red. Some species, especially night active and crepuscular species, lack the red cone (TAKENAKA & YOKOYAMA 2007; SILLMAN et al. 1997). The four cones in a hypothetical “archetypal” reptile eye (devised for this illustration) are shown in Figure 6. Four cones enable tetrachromatic colour vision, in contrast to the trichromatic colour vision which results from the three cones in the human eye.

Light quality from a reptile’s perspective

Scattering and filtering of light in the atmosphere, in clouds, or reflected from the environment (foliage, sand, rocks) influences the colour of daylight. The spectra of some of these different forms of natural light are shown in figure 4. To the human observer, the scattered light from the sky that reaches the ground in the shade of a rock or trees is bluish. Under dense foliage, neither direct sunlight nor skylight reach the ground, but only the greenish light that is filtered by the leaves (ENDLER 1993; FEDERER 1966; DECASTRO 2000). At sunrise and sunset the light is reddish and “comfortably warm”, whereas bright sunlight is “warm-white” with 5,000 K colour temperature. When it is cloudy, the light becomes “cool-white”, around 6,500 K. In foggy weather, or in daylight with snow, the colour temperature may reach “cold and uncomfortable” values of up to 20,000 K.

There is a palpable connection between our perception of low colour temperatures as 'warm' and high colour temperatures as being 'cold', and the actual temperature in the respective situations under natural daylight, as illustrated in Figure 5. Reptiles, as poikilothermic animals, depend much more on the weather than man does. Could this mean that they are also more sensitive to the different coloured phases of daylight?